Create an Account - Increase your productivity, customize your experience, and engage in information you care about.

Musk thistle · Carduus nutans (L.) · (aka nodding thistle) is a native of Europe. It was first recorded in the United States in 1852 at Harrisburg, PA. The first documented report of musk thistle in Kansas was from a collection made in Washington County in 1932. Musk thistle is a noxious weed in all counties in Kansas. Kansas law requires that all persons and organizations prevent the spread of musk thistle and eradicate it on all lands owned or supervised by them. Any livestock feed material containing musk thistle seed shall not be sold, offered for sale, bartered or given away except to processors or where the grain or hay will be consumed on the same farm where grown. 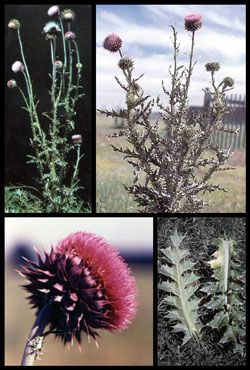 Musk thistle normally requires two years to complete its life cycle (i.e. biennial or winter annual). Occasionally, the plant completes its life cycle in one growing season (i.e. summer annual). The typical biennial musk thistle exhibits itself the first year in the form of a rosette, a cluster of tightly packed leaves laying flat on the ground. Rosettes vary in diameter from a few inches to three feet. Musk thistle overwinters as rosette. During the rosette stage (either fall or spring), musk thistle is most susceptible to chemical control. In its second year of growth, the musk thistle plant will leave the rosette stage as its stem elongates (bolts) toward the mature, flowering plant with a large fleshy taproot that is corky and hollow near the ground surface. Chemical control is less effective during the bolted stage and chemical susceptibility continues to decline as the plant reaches maturity.

The leaves of musk thistle are deeply lobed, hairless, and are dark green with a light green mid-rib. A silver-gray leaf margin is characteristic of each spine tipped lobe. The leaf base extends down the stem to give the plant a winged appearance.

Musk thistle is the first of the Kansas thistles to bloom in the spring. Flowering begins in mid-May and continues through early July. Each head consists of many tightly packed rose to purple colored flowers encased in a series of spine-tipped, green bracts. The terminal (uppermost) head is 1½ – 3 inches in diameter, solitary, and generally bent over or nodding. The mature plant is generally branched, with each lower branch producing one or more heads. Flowering begins with the terminal head and progresses downward. Musk thistle heads are distinguished by their “powder puff” shape. Other Kansas thistles have “shaving brush” shaped heads. Disposal of seeds begins approximately 30 days after blooming of the head. Seeds are straw-colored, oblong, and 1/8 inch in length. The seeds are attached to parachute-like hairs (pappus) which allow for their dispersal by wind currents. The potential for seed production is enormous. Large plants can potentially produce 15,000 seeds with approximately 50% of those being viable.

Cultural Controls
Musk Thistle can be effectively controlled when treated with an approved herbicide before the flower stalks bolt. Hoeing or tillage will control Musk Thistle. If hand-digging, dig the root at least two inches below ground level and remove all soil. Repeated mowing of Musk Thistle will reduce seed production.