Russian Knapweed · Acroptilon repens (L.) DC · is a perennial Forb that originated in Eurasia. It flowers from June through September, and reproduces through rhizomes and seeds. It was probably introduced to North America in the late 1890s as a contaminant in crop seed. It rapidly spread throughout much of the Great Plains. 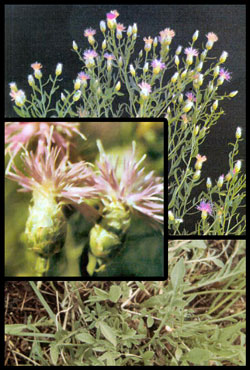 Found in fields, pastures, rangeland, waste places, fence rows, roadsides, and irrigation ditches. Russian knapweed is not grazed by livestock because of its bitter taste. Deer rarely eat it.

Russian knapweed can be an aggressive and difficult to control pest in alfalfa, clover, other forage crops, pastures, and occasionally in row crops. It has become more abundant in recent years. It is a noxious weed in many states.